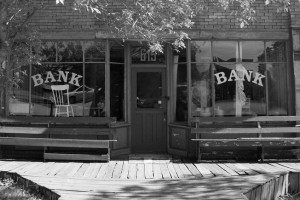 The current movie Hell or High Water is receiving critical acclaim for its depiction of two bank-robbing brothers and two Texas Rangers law enforcement officers on their trail. From a security professional’s standpoint, the state of video surveillance in the unfortunate banks is a source of both amusement and distress.

In the film, the Texas Rangers ask for video footage after the brothers rob each of the first two banks. The manager of the first “Texas Midlands Bank” says they are switching to a digital system and haven’t had video for some time. The second bank manager has a similar excuse. At one point Texas Ranger Marcus Hamilton – played brilliantly by Jeff Bridges – bursts out in exasperation: “Don’t they sell electronics at Walmart?”

The third bank (NOT a Texas Midlands Bank) seems to have its video surveillance act together. When Hamilton asks if they have working video, the bank manager exclaims, “Of course we have video. What kind of a bank doesn’t have video?” Hamilton retorts, “Texas Midlands Bank, that’s who!”

Unfortunately, bank robbery and crime is not confined to our Old West past or the imaginations of Hollywood screenwriters. According to the FBI, the number of U.S. bank robberies rose in 2015 by 3.5 percent, with 4,091 financial institutions hit. Nearly all of these were branch offices. The top five states affected were California, which had the most at 473, followed by Texas (263), Pennsylvania (260), New York (243), and Florida (240).

Vulnerability to robbery is just one of the security challenges facing financial institutions. Others include:

Of course, if the Texas Midlands Bank Branches in the movie had deployed Razberi, the Texas Rangers would have had a much easier time of it.

The banks could have provided video of the robberies on demand using intelligent surveillance appliances, with one of the family of Razberi ServerSwitchIQ™ appliances. Many financial institutions have indeed chosen Razberi because of the superior, cost-effective alternative to general-purpose servers, switches, storage and power for IP video surveillance.

By deploying Razberi in a distributed appliance architecture – near the edge of the network rather than in the core – network utilization is reduced by up to 95 percent while increasing megapixel video quality and reducing capital, bandwidth and space costs. Razberi’s open, scalable platform combines server, storage, managed switch, and PoE as well as health monitoring and cyber security features. The new ServerSwitchIQ Rugged serves not only extreme environments like the hot, dusty, dirty Texas terrain in the movie but also urban locations that face incredibly difficult environments.