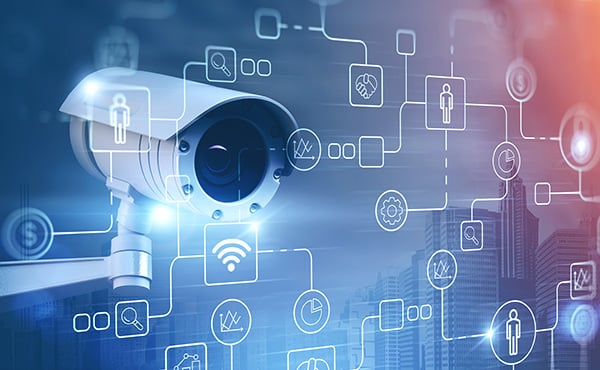 Bandwidth is the capacity of a network to transfer data. It is quantified as the number of bits transferred through a network system for a measured period (bitrate). For data transfer and storage, current network bitrates are measured in gigabytes (1 billion bytes) or terabytes (1 trillion bytes) per second, respectively.

Digital audio and video bitrate is further defined by the amount of detail transmitted or stored per second of streaming or recording. Bitrate terminology remains the same; however, audio and video bandwidths are typically quantified in kilobits (1,000 bits), megabits (1 million bits), and megabytes (8 megabits) per second respectively.

The bitrate of digital audio and video is dependent on additional factors such as media sampling, encoding, or compression. Sampling is simply defined as converting sound from analog to digital. Encoding means converting digital audio or video from one format to another. And media compression is the process by which a media file is reduced in size.

The bandwidth of digital audio and video is referred to as the net bitrate, which is the capacity to transfer data without protocols, encoding data, and channel coding.

Factors that lead to high bandwidth demands for IP video surveillance cameras include:

This refers to the clarity and sharpness of digital video images. For a long time, 1080P was the standard resolution for high-quality images.

This refers to the measure of frames or images a video displays per second. Higher frame rates improve the smoothness of objects in motion, which also increases bandwidth demand.

IP video cameras, designed to capture images at high frame rates and produce high-quality video typically will require increased bandwidths when recording in an environment with many moving objects, when objects are moving at different speeds, and while changing light and low light levels.

The growing industry for IP video surveillance cameras equipped with Artificial Intelligence analytics that gathers information quickly to speed up observations and investigations will result in greater bandwidth demands.

This is how repetitive images, sounds, scenes, noise, and unwanted data are removed from the video using video codecs. IP video camera recordings usually are compressed when they pass through the network.

Specialized codecs (digital media encoder/decoder devices) allow for significant bandwidth reduction without drastically decreasing image quality. However, many codecs are successful only in reducing the video file size and have minimal or no significant effect on bandwidth reduction. Since unwanted data is only sorted or encoded, it remains as part of the gross bitrate.

The demand to incorporate more cameras and sophisticated devices in video surveillance systems has increased due to the current pandemic environment. 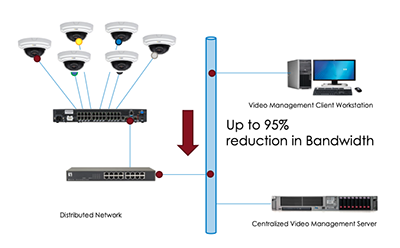 This type of bandwidth bottleneck is prevalent for surveillance video cameras incorporated in local area networks, where the situation is not easily monitored and addressed.

Bandwidth bottlenecks also happen in wide area networks managing many surveillance video camera feeds and multiple streaming feeds simultaneously, over limited servers, or even in cloud storage. Bottlenecks tend to continue and worsen due to the lack of timely network health monitoring.

Image quality, frame rate, thermals/light levels, and video complexity may contribute to high bandwidth demands. However, many of these factors are part of developing sophisticated and effective IP video surveillance systems and are increasingly preferred by customers.

The lack of automated and physical monitoring to prevent bandwidth bottlenecks adds to bandwidth issues and can result in network connectivity problems affecting the entire system.

To learn more about the advantages of IP video surveillance and potential benefits and concerns observed during the current pandemic environment, we recommend reading this article State of the Market: Video Surveillance in 2021.

Reduction in camera quality and function is almost never an option or solution to bandwidth problems. Hence, organizations rely on ComNet and Razberi to provide high-level solutions for key bandwidth issues.

Separating out the IP video surveillance system will significantly reduce bandwidth demands on the customer’s network. The design uses a Network Video Recorder (NVR), such as Razberi’s ServerSwitchIQ™ integrated NVR and more, to bridge the camera network and customer’s network.

The NVR reduces customer network bandwidth demands by avoiding direct network feeds and allowing streaming video recordings to the main network only when the client requests it.

Razberi’s EndpointDefender™ provides a point of entry and a secure Ethernet connection to third-party video cameras and IoT devices on local area networks and for distributed video surveillance configuration.

In addition, the software predicts and prevents problems for security professionals while providing a centralized location for IT departments to view the video data.

If you’re interested in learning more about solutions that address current and future challenges of video surveillance, you can visit our blog, Razberi Pulse, or access our free on-demand webinar.